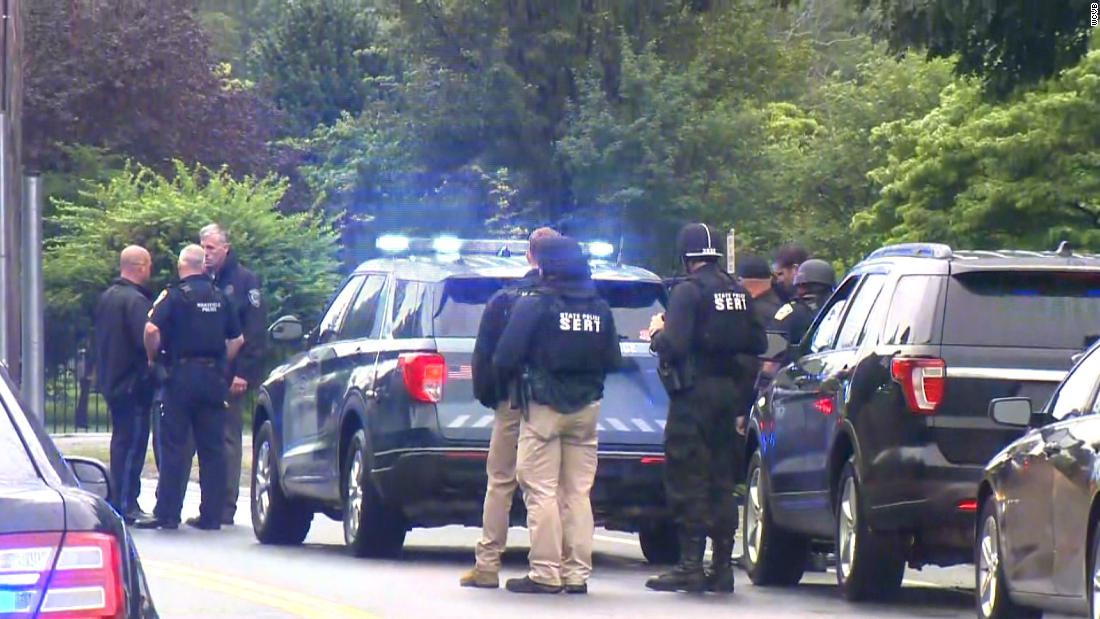 The ordeal, which started during a police traffic stop, led to the shutdown of part of Interstate 95 and a shelter-in-place order for the surrounding area on a busy holiday weekend, police said.

The standoff lasted almost nine hours, but police were able to resolve the situation “through a combination of negotiation and tactical measures,” including the use of armored vehicles, Massachusetts State Police Col. Christopher Mason said at a press conference.

All arrested individuals surrendered without incident, police said. Mason said a number of firearms were seized, but he declined to say how many.

Middlesex County District Attorney Marian Ryan said authorities are working on identifying the men, who told investigators they are from Rhode Island. Ryan said the men were likely to appear in court on Tuesday on firearms and other charges deemed appropriate.

The situation started around 1:30 a.m., when a state trooper saw two vehicles in the breakdown lane with their hazard lights on, Mason said.

The men claimed to be “from a group that does not recognize our laws,” according to a statement from the Wakefield Police Department.

The men were wearing what Mason described as tactical vests and military style uniforms, along with body cameras, and they were carrying a mixture of long rifles and pistols. The men indicated they were traveling from Rhode Island for “training,” according to Mason.

At some point during this interaction, a number of the individuals ran into the woods with their firearms, Mason said. Police established a perimeter, and two people were initially arrested in the woodline, one of whom was armed, according to Mason.

Massachusetts State Police said in a tweet around 5:30 a.m. that members of the group were “refusing to comply with orders to provide their information and put down their weapons.”

Mason said he was not aware of any specific demands by the group and that negotiators engaged with them to learn more.

“Through our hostage negotiation team, we are talking with the subjects — some that are in the woods, some that are in the vehicles in the breakdown lane where the original interaction occurred — and we are hopeful that we are able to resolve this peacefully with them,” Mason said during the standoff.

Of the 11 ultimately arrested, two suspects were located in the vehicles, state police said.

The group’s self-professed leader wanted it known that their ideology is not anti-government, Mason said.

Authorities swept the two vehicles and the woods to search for more weapons.