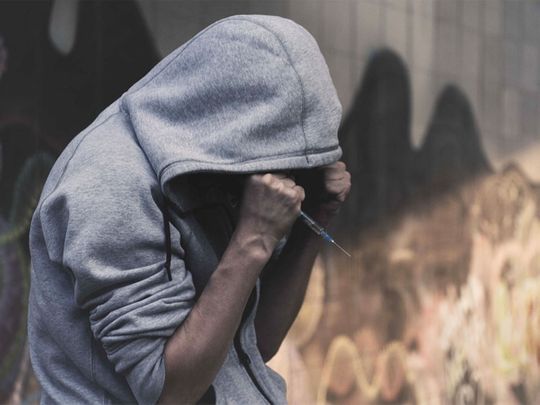 Dubai: Dubai Police have rescued a young drug addict after he fell into bad company along with a relative of his who died of a drug overdose.

Colonel Abdullah Al Khayat, Director of Hemaya International Centre in Dubai Police, said the youngster, in his 20s, was attached to his relative in spite of knowing that he was a drug addict.

The youth’s mother sought help from Dubai Police, who put him in a rehabilitation centre. Police did not slap criminal charges against him according to Article 43 of the Anti-Narcotics Law, which exempts drug users from criminal charges if they voluntarily approach the police for help or are reported by their family or friends.

“The parents were angry with their son who used to be with a relative who was a drug addict and had died from an overdose of drugs. The youngster’s behaviour had also changed for the worse and he didn’t respect house rules or his parents,” Col Al Khayat said during a virtual session organised by Hemaya Centre, in cooperation with the United Nations Office on Drugs and Crime.

The youngster’s mother kept monitoring her son, looking for signs of psychological changes and alterations to his lifestyle and behaviour due to the impact of drugs even during the COVID-19 pandemic. She kept watch on the youth who became addicted to illegal painkillers which he came to know through the relative who eventually died.

“He said he was confident that he could stop consuming those painkillers anytime he wanted, but in reality, he became addicted to them,” added Al Khayat.

His mother then asked the police for help.

“We provide mental support to rebuild the relationship between the addict and his family. We provided a remote session with experts at Hemaya Centre during the COVID-19 pandemic to answer questions and give advice to speed up the recovery of addicts.”

Dubai Police called on families to take advantage of Article 43 of the Anti-Narcotics Law, which offers an opportunity to young people who have fallen victim to drug abuse to reform. Families should voluntarily report any case of drug addiction among family members so that the addict can be put under surveillance and be subjected to necessary treatment.

Col Al Khayat urged parents to be close to their children and be judicious while interacting with or monitoring them. “Sometimes, they [children] become addicted to illegal painkillers thinking it is a safe way to escape from academic or family issues pressure. Beware of addiction through illegal painkillers,” he advised.