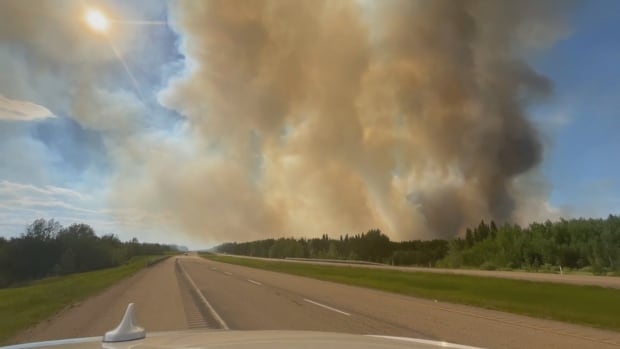 A wildfire west of Edmonton that triggered evacuation orders in parts of Yellowhead County on Tuesday continues to burn out of control and is expected to keep growing.

“We do expect fire activity to pick up today as temperatures rise,” Josee St-Onge, a provincial wildfire information officer said in an interview Wednesday.

“Whenever we have that hot, dry weather, it’s always a concern.”

Parts of Yellowhead County were placed under evacuation Tuesday as a wildfire north of Highway 16 moved south, encroaching on homes and farmland.

Around 50 people were forced from their homes, the county said in a statement Wednesday.

The fire continues to burn out of control nine kilometres northwest of Evansburg, north of Highway 16 and west of Highway 22. The wildfire crossed the Lobstick River but has not crossed Highway 16, which remains closed due to the encroaching flames.

The fire was first noticed at 4 p.m. Tuesday when it  covered just two hectares.

Throughout the day, amid high winds, the fire spread south, multiplying in size.

As of Wednesday morning the fire had burned at least 181 hectares, having grown by around 40 hectares overnight.

“The fire is not threatening any communities and we don’t have any reports of any injuries or properties that have been damaged. But that assessment is ongoing and it’s a dynamic situation, so that could change,” St-Onge said.

On Wednesday, 32 firefighters, four helicopters and 11 pieces of heavy equipment were working the fire. Six air tankers have also been deployed, St-Onge said, and are taking water from nearby Chip Lake in an attempt to stifle the “head of the fire.”

Around 30 firefighters with the Yellowhead County are also on scene.

The wildfire danger in the area is listed as very high. Daytime temperatures in the region are expected to reach 33 C by the weekend with no rain in the longterm forecast.

“That is going to drive the fire danger in the province to high, very high levels,” St-Onge said.

Evacuation orders issued on Tuesday remain unchanged. Residents along Highway 16 between Evansburg and Wildwood have been told to leave.

The evacuation order also applies to the Lobstick resort area. An evacuation centre has been set up at the Evansburg Arena.

Highway 16 remains closed, from Highway 22 to Highway 753, and drivers in the area are warned of reduced visibility.

John Miller was at his motorhome when a cloud of “big smoke” came into view and a police car pulled up with siren activated.

“The police come up and said, ‘You gotta get out of here right now.’ He said he’s not coming back to give me a second warning so luckily I had my old truck out there, so I fired it up and came to town.”

Miller and his wife Phyllis own an RV lot overlooking the Lobstick River, a summer property they have enjoyed for 20 years.

Miller’s wife had gone for groceries when the evacuation orders came.

“I just saw the smoke and called hubby and he said, ‘We have to go and we have to go now,'” she said.

The couple met on the shoulder of the highway and spent the night at a hotel.

Miller remains hopeful their property will be spared but said the local landscape is full of muskeg, a natural fuel.

“These underground fires can go into the peat moss and burn for years.”

Krista Wiggins fled her home Tuesday as black smoke billowed above the treeline.

“It looked like it was right in my backyard,” Wiggins said as she registered at the evacuation centre.

“A little too close for comfort.”

Wiggins said she, her husband and young daughter would wait out the fire at a nearby hotel.

“Hopefully they have some good news for us and we can go home,” she said.