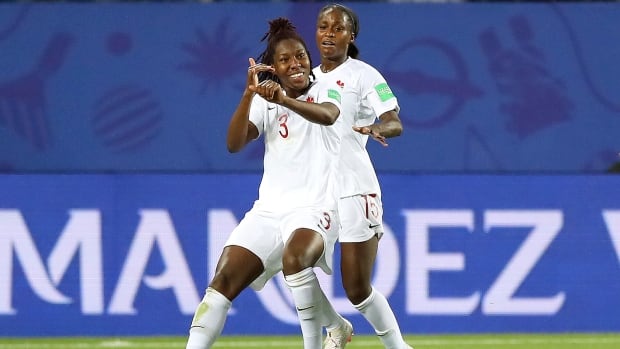 With the official announcement of the Canadian women’s Olympic soccer roster revealed by Canadian coach Bev Priestman Wednesday, the team can now concentrate on a loftier goal.

Winners of back-to-back bronze medals, the Canadian players have aspirations of reaching the medal podium for an unprecedented third consecutive time at the Tokyo Olympics.

But Canadian coach Bev Priestman wants to change the colour of the medal this summer in Japan, and she is challenging all 18 players on her Olympic roster — from veteran Christine Sinclair to youngster Deanne Rose — to push themselves out of their comfort zone in order to make it happen.

“If we got another bronze [in Tokyo] we’d still be a history-making team. But when you work with players who have played in back-to-back Olympics, like Christine Sinclair, how do you keep pushing Christine to be better than she’d been before? For me, I think the team needed another push, and to change the colour of the medal you have to do things and ask more things of people that haven’t been asked before,” Priestman told CBC Sports.

“That’s been the challenge with this group, to take the shackles off, like ‘Let’s go!’… It’s a mammoth task, but I do believe if all the jigsaw pieces are right and we keep it simple, but maximize [our] strengths, on our day Canada can compete with the best teams in the world.”

With the team set, here’s a breakdown of Canada’s Olympic roster:

Get must-watch video, live events and breaking news on CBC.ca

Canada boasts a solid pair of shot-stoppers who both can be called upon at any time as the No. 1 goalkeeper.

Labbé, 34, has been with the national team a lot longer than Sheridan, and has accumulated far more international appearances (78 vs. 11). She also backstopped Canada to a bronze medal at the 2016 Olympics in Rio. If experience counts for anything, then Labbé will be between the posts when Canada kicks off its tournament on July 21 against host Japan.

Sheridan, 25, is a rising star in Canadian soccer, and won the Gold Glove Award as the best goalkeeper in last season’s NWSL Challenge Cup. She supplanted Labbé as the starter at the SheBelieves Cup back in February, but then suffered a quad muscle injury seven minutes into Canada’s opening game that ruled her out for the rest of the tournament. Labbé has started all but one match for Canada since then.

Labbé is Canada’s goalkeeper of the present, and Sheridan is the goalkeeper of the future. But given the fact they are both at the top of their respective games, it wouldn’t be a major surprise to see Priestman rotate between the two and give them both a taste of action in the group stage.

In seven games in 2021, Canada has recorded four shutouts, including blanking fellow Olympic participants Brazil. It’s an impressive defensive record that owes a lot to a sturdy and well-organized back-line.

Buchanan, the reigning Canadian player of the year, is one of the best centre backs in the women’s game, and serves as the quarterback of a defensive unit that gives very little away. Zadorsky is coming off a breakout campaign in England where she became a regular starter with Tottenham, and has formed an impressive duo with Buchanan in the heart of Canada’s defence.

Gilles is a relative newcomer who debuted for Canada in 2019 and only has six appearances under her belt. But the Quebec native has forced her way into the Olympic squad by virtue of her aerial strength and tenaciousness on the ground. Her inclusion in the team means Canada has three talented centre backs, giving Priestman the ability to seamlessly switch from a four-woman defence to playing with three central defenders.

Experienced fullbacks Ashley Lawrence and Allysha Chapman give Canada a sturdy defensive presence on the flanks, but they’re also dangerous going forward and provide width to the attack. There’s been a long standing debate over what Lawrence’s best position is, defender or midfielder. Lawrence’s versatility gives Priestman more options to tinker with her lineup, and she can easily slot into midfield in case of an injury to a teammate.

With 21 caps, Riviere is the least experienced defender on the team. But the 20-year-old is a bright up-and-comer who isn’t shy about getting forward in support of the attack.

With Diana Matheson ruled out due to injury and fellow veteran Sophie Schmidt on the alternate list, Canada’s midfield will look considerably different compared to the last two Olympic tournaments.

However, Scott offers Canada continuity in the middle of the park. The 33-year-old native of Winnipeg has a pair of bronze medals and 162 international appearances, and has been at the heart of the national team’s midfield for more than a decade. Beyond her experience, Scott is an important team leader on this Canadian side, and has deservedly earned the nickname “The Destroyer” on account of her tenacious tackling and ability to disrupt opponents from getting a foothold in midfield.

Quinn has been one of Canada’s best players this year, earning plaudits for their outstanding two-way play. Athletic and comfortable in possession, they are also able to slot into the defence, thus giving Priestman more options.

Fleming is coming off a solid rookie campaign with Chelsea where she gained valuable playing time in the English FA WSL and UEFA Women’s Champions League. The 23-year-old from London, known for her skills on the ball and silky passing, will be looked upon to act as Canada’s chief playmaker in Tokyo.

Grosso, 20, will be competing in her first major tournament for Canada in Japan – she was an unused player at the 2019 FIFA World Cup in France. The Vancouver native is considered one of Canada’s brightest prospects, but she hasn’t been given much of an opportunity since making her national team debut in 2017. Her inclusion in the 18-player roster at the expense of Schmidt is a strong showing of faith from Priestman, who’ll expect Grosso to add vigour and dynamism to central midfield.

As reliable as Canada’s defence has been this year, the same can’t be said for the attack. The Reds have scored just six goals in seven games in 2021, and have been shut out four times over that same stretch.

Even more troubling is that Sinclair hasn’t scored in her previous eight appearances for the Canadian team dating back to February 2020. That’s not a good omen considering how much Canada relies on its iconic captain to spark the offence. But Sinclair, who is the all-time leading scorer in international soccer (for both men and women) with 186 goals, has a track record of coming up big in major tournaments, and she’ll have a point to prove in what is likely her final Olympic appearance.

With 31 goals in 75 appearances, Beckie is Canada’s fifth all-time leading scorer, and is coming off a pair of seasons with Manchester City where she impressed in the English topflight, as well as in the UEFA Champions League. Capable of playing anywhere across the front line, Beckie will have to pick up some of the scoring slack and help out Sinclair if Canada is to progress far in the tournament.

Viens is a former NCAA standout who was long overlooked by Canada, and only made her international debut in February. She’s played her way onto this team thanks in large part to her solid hold-up play and the physical and athletic presence she provides up front.

Leon is coming back from a foot injury that sidelined her for several months, and the veteran is known for her work rate and being a dangerous weapon off the bench. Prince and Rose are quick youngsters who can unbalance opposing defenders with their direct runs when they’re in possession.

Huitema seemed like a lock for the Olympics a year ago. But she dropped down the forward depth chart since then, paving the way for Viens to take her roster spot. McLeod is a veteran who won an Olympic bronze in 2012 and played in three World Cups.

Carle is a promising youngster who looks destined to become a future starter for Canada. Schmidt has been a mainstay with the national team since 2005, has two bronze medals, and is one of only three players with over 200 caps for Canada. But she’s stagnated a little bit for Canada over the past 12 months.

WATCH | Women’s soccer is at a crossroads in Canada — what’s next?

In partnership with Homestand Sports, CBC takes a look at the state of women’s soccer in Canada, and what needs to happen for the sport to take the next step. 5:02