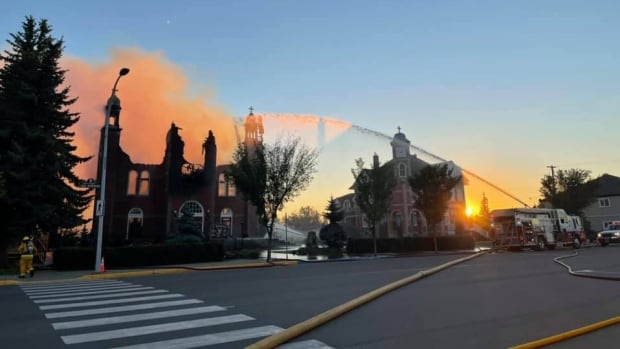 An early morning fire that destroyed a century-old Catholic church about 30 kilometres north of Edmonton Wednesday is being treated as suspicious by RCMP.

The fire inside the St. Jean Baptiste Parish in Morinville is being investigated as arson, Staff Sgt. Tom Kalis said in an interview with CBC News.

“Given the time and the circumstances around the event, as well as some evidence that we’ve initially been able to gather at the scene, suggests to us that we should be treating this as a suspicious fire,” Kalis said.

Town of Morinville officials will speak to reporters at 11 a.m. local time. Watch it live here.

The first call to 911 was made at 3:08 a.m. MT on Wednesday, the town said in a news release. Fire crews were dispatched two minutes later and arrived on scene at 3:20 a.m.

“Upon arrival, crews determined the fire was already well involved in the basement of the structure,” the news release said. “Fire crews attempted to make entry, but the building was charged with smoke and collapse was already occurring.”

Surrounding buildings were evacuated. About 50 residents living in the former convent building were forced to leave their homes. That building was damaged by water and smoke, the town said.

Videos shared by witnesses on social media show the church’s steeple collapsing as it is engulfed in flames.

According to the statement from the town, the fire was under control by 7 a.m., and 50 firefighters were on scene, as well as an investigator.

Heavy equipment is expected to arrive before noon to level what remains of the church, a town spokesperson said at the scene.

The first rectory — a simple log structure constructed in 1895 — was moved and joined to a second building erected in 1912 to create the current rectory.

“Certainly the timing [of the fire] is unfortunate, given that it is a rather iconic Catholic church in our community and with the timing of sad events that have been uncovered in the country, right now,” Iain Bushell, Morinville’s general manager of community and infrastructure services, said in a phone interview from the scene.