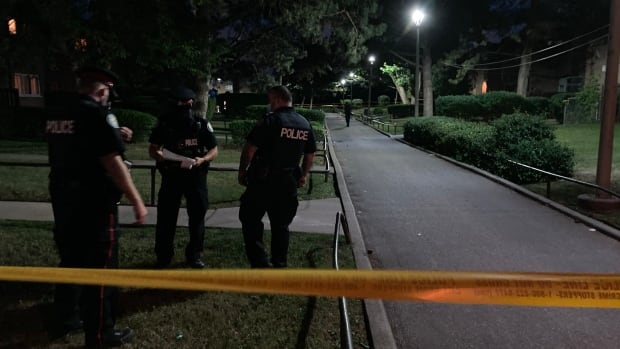 Police had said four victims, with varying injuries, were being taken to hospital via emergency runs. But Evert Steenge, deputy commander with Toronto Paramedic Services, told CBC Toronto that five people were shot.

He said paramedics were called to Tandridge Crescent and Byng Avenue just before 8 p.m. ET for reports of a shooting in the area.

Speaking at the scene, Toronto police Supt. Ron Taverner said the shooting happened at a birthday party for a one-year-old. He said the children included an 11-year-old, a five-year-old and a one-year-old who was grazed by a bullet.

“Obviously this is very early on in the investigation but at this particular time it doesn’t look like any of the people who were shot were particularly targeted,” Taverner said.

“It seems like they were just there and ended up being shot by the shooters.”

Taverner said the suspects were on foot at the scene of the shooting, but said police believe there was a vehicle used in their escape.