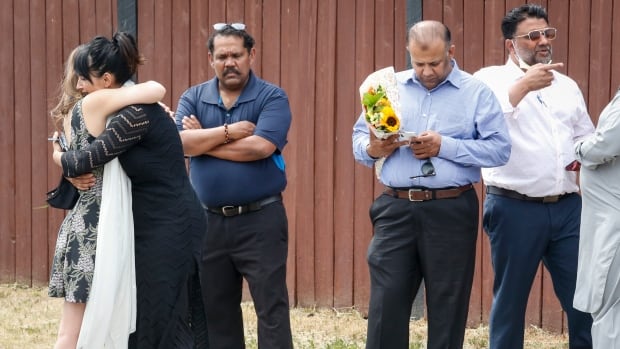 Special prayers were held at Calgary’s Green Dome mosque and at the Chestermere Islamic Centre east of the city in honour of seven members of the same family who perished in a house fire early Friday.

Imam Syed Soharwardy, with the Islamic Supreme Council of Canada, says relatives of the family, some of whom have just arrived in Alberta from Ontario in the wake of the tragedy, watched livestreams of the services.

Soharwardy, who knows the family, says they’re still in shock.

Chestermere Mayor Marshall Chalmers says in a statement that “words cannot effectively express the devastation on (the) community.”

RCMP have said the cause of the fire is under investigation but initial findings don’t suggest it was deliberately set.

“In our Islamic terminology, anybody who died because of these kind of tragedies, they are considered as martyrs,” Soharwardy said in an interview Saturday.

“Everybody is very much in sadness. It’s shocking that seven members of this family died in this tragic accident.”

Police have listed the seven dead as: a man and a woman, both 38, a woman about 35-years-old, a boy and a girl aged 12, an eight-year-old girl and a four-year-old boy.

Most of the relatives of the family are in Pakistan, Soharwardy said.

A statement released by the family through Imad Ali Syed asks for patience as the investigation continues.

“The family is distraught over the events that took place and would like to have some privacy while they grieve for this tragic loss,” the statement reads.

“Extended family and friends are with the family and supporting them during this trying time.”

Chalmers thanked emergency responders for their efforts, and also thanked people across Alberta for their thoughts and prayers.

“While many will feel helpless in the face of such heartbreak, all we can do is to join together to grieve, to listen, and to support those impacted,” the mayor said in his statement.

“And I know that the community of Chestermere will do so with the greatest outpouring of love possible.”

Family, friends and neighbours converged at the scene to mourn the loss of seven members of two families and support the survivors. 1:21