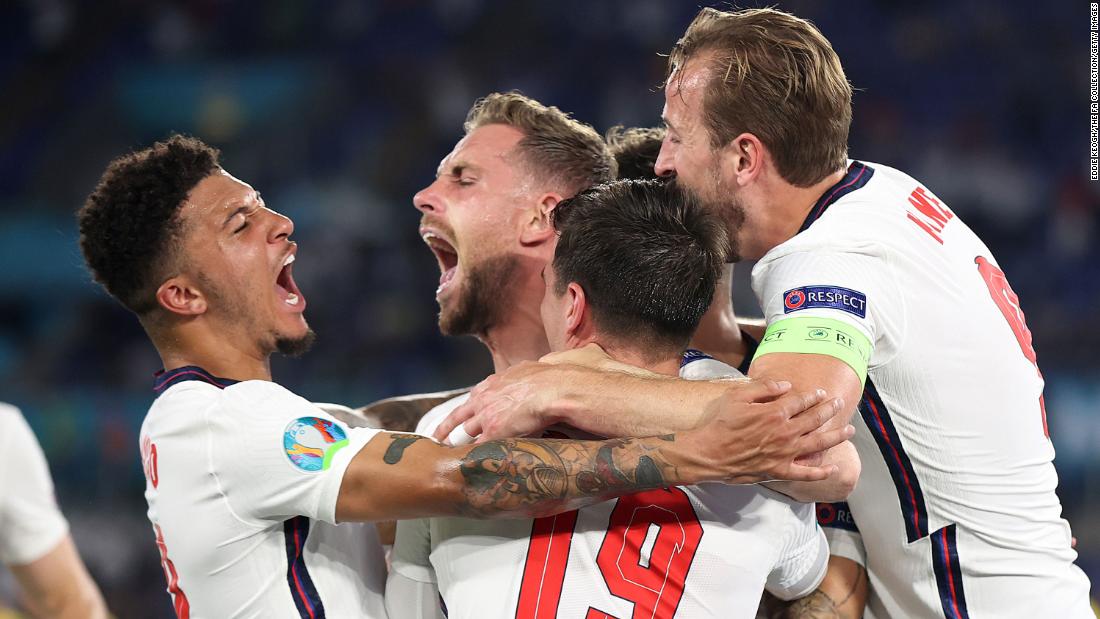 England reached the semifinals of the European championships for the first time in 25 years after an impressive 4-0 win against Ukraine in Rome on Saturday.

This was the only third time England had won a knockout match in the Euros, but goals at the start of each half helped calm any potential nervousness.

Sterling has arguably been England’s best player during Euro 2020 and with Jadon Sancho starting his first game of the tournament, Ukraine struggled to deal with the speed and invention of Gareth Southgate’s team.

England hasn’t conceded a goal in five games during Euro 2020, with Ukraine’s best chance falling to Roman Yaremchuk, whose first-half shot was shoveled away by Jordan Pickford.

Harry Kane scores the first of his two goals against Ukraine in England’s 4-0 win.

Early in the second half, Harry Maguire powered Luke Shaw’s free-kick past Ukraine goalkeeper Heorhiy Bushchan to make it 2-0.

Soon after Kane headed in a third England goal, with Shaw again providing the assist.

That two-goal blitz in the opening five minutes of the second-half put England in complete control of the match.

Bushchan brilliantly saved Kane’s volley to deny the England captain a hat-trick, but from the resulting corner Jordan Henderson scored with another header. It was Henderson’s first ever goal for England.

As the clock ticked down, England fans belted out football is “coming home,” the chorus to “Three Lions,” the adopted anthem of the team’s supporters.

Three years ago England got to the World Cup semifinals but were beaten 2-1 by Croatia – despite taking the lead – and in 2019 lost 3-1 to the Netherlands in UEFA’s Nations League tournament. England last reached the final of a major international tournament in 1966.

“I suppose it’s still sinking in that it’s another semifinal – three in three years,” Southgate told the BBC.

“We want to go two steps further. I know what will be happening at home. It’s lovely to see everyone on a Saturday night, beer in hand. They should enjoy it. It’s been a long year for everyone. I’m chuffed the two performances have brought so much happiness to people.

“The players have been fantastic,” added Southgate. “To play as well as they did in a game with so much resting on it was impressive. The spirit in the group is phenomenal.”

England now play Denmark, who beat the Czech Republic earlier on Saturday, and Southgate’s team will have home advantage with Wednesday’s semifinal to be held at London’s Wembley Stadium.

Seemingly down and out after losing its first two games at Euro 2020, Denmark won a third successive match to reach the semifinals after getting the better of the Czechs in Azerbaijan’s capital Baku.

Thomas Delaney’s header and Kasper Dolberg’s volley in the first half put Denmark in control of Saturday’s quarterfinal.

The Czechs were a different side after the interval and Patrik Schick’s clever finish – his fifth goal of Euro 2020 – ensured Denmark had to work for its 2-1 victory.

Thomas Delaney scored Denmark’s first goal with a header from a corner.

Kasper Dolberg finished off a flowing move to score the Danes’ second goal.

After Christian Eriksen’s shocking collapse and his teammates’ emotional response, Denmark has provided the feelgood story of Euro 2020 by qualifying for the knockout stages.

It looked unlikely after defeats to Finland and Belgium in its first two group stage games, but the 4-1 hammering of Russia and Finland’s 2-0 defeat to Belgium secured its place in the last-16.

The Danes then secured a hugely impressive 4-0 win against Wales to announce its arrival in the latter stages of Euro 2020.

Patrik Schick scored his fifth goal at Euro 2020 to revive the Czechs’ hopes.

Denmark’s players spoke of the emotional toll returning to finish the game of Eriksen’s collapse the same afternoon had on them, with several members of the squad criticizing European football governing body UEFA for not allowing them to play the match the following day.

Given this group’s remarkable mental fortitude, Denmark fans may have perhaps already allowed themselves to start dreaming of a repeat of Euro ‘92, when the national team secured its only major international trophy to date.

Italy and Spain meet in the other semifinal on Tuesday, which will also be played at Wembley.