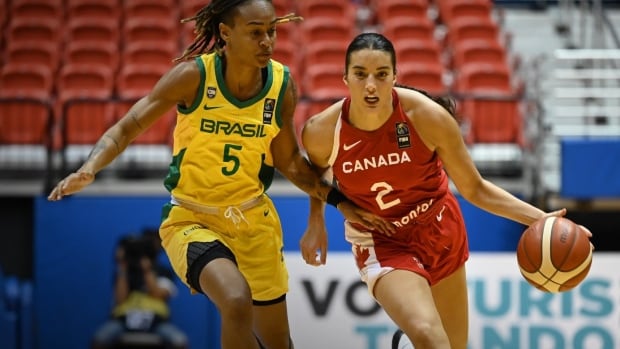 Canada failed to earn a medal at the FIBA AmeriCup women’s basketball tournament after losing 87-82 to Brazil in double overtime Saturday.

After a poor third quarter in which they were outscored 29-9, the Canadians overcame a 15-point deficit in the fourth to send the game to overtime.

Laeticia Amihere of Mississauga, Ont., led the way with seven points and four rebounds in the fourth quarter, including a clutch three-pointer with 27 seconds left to force OT.

The 19-year-old topped all Canadian players with 22 points and 11 rebounds on the night.

“She’s such a competitor, like a number of these players,” said head coach Lisa Thomaidis of Amihere. “Just tough and competes, and again, hit the three-point shot to tie the game to send it into overtime. She’s fearless and so young, but certainly doesn’t play like a young one. Real happy with how she did at this tournament.”

Both teams scored nine points in the first overtime period before Brazil pulled away in the second.

Canada, ranked fourth in the world, went 5-2 at the tournament including a perfect 4-0 in the preliminary round. The Canadiens defeated the Dominican Republic in the quarter-finals before a tight loss to hosts Puerto Rico in semifinal action.

The Canadian women now return to Tampa, Fla., to continue Olympic preparations. With its performance at the FIBA AmeriCup, the team also earned a spot at World Cup qualifying tournaments.

“We learned a lot and there’s a lot to look forward to,” said Jamie Scott, who had nine points and nine rebounds. “Obviously the Olympics this summer, but also the next step in our journey and worlds in Australia.

“I think the future is very bright and I’m definitely excited for it.”

WATCH | Looking ahead to Canada’s chances in Tokyo: