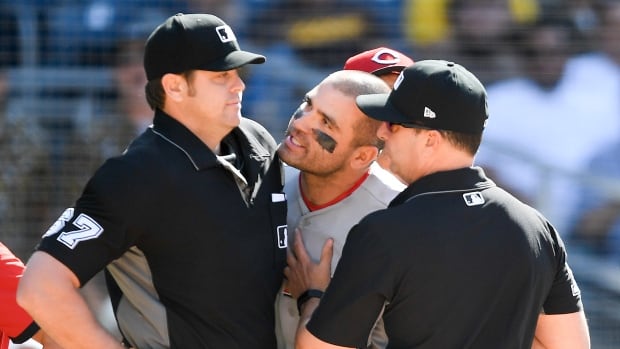 Joey Votto and manager David Bell of the Cincinnati Reds were ejected in the first inning Saturday following a heated argument with home plate umpire Ryan Additon after Votto was called out on a checked swing.

A Padres fan sitting in the expensive seats near the Reds dugout also was tossed.

Catcher Webster Rivas appealed after Votto offered at the high, outside pitch from Miguel Diaz, and third base umpire Chris Guccione confirmed that Votto went around.

Votto was unhappy and began arguing, and Bell came out of the dugout and joined the argument. Bell and coaches Delino DeShields and Freddie Benavides had to keep Votto away from Additon, who then apparently ejected the player and manager at the same time.

Joey Votto has been ejected from today’s game.<br><br>He struck out on a check swing and had words for the umpires after the call. <a href=”https://t.co/LbAiIx7JIw”>pic.twitter.com/LbAiIx7JIw</a>

Votto had to be restrained as he continued to argue. Shortly after Votto went to the dugout, the fan was ejected. Bell came back out on the field to continue arguing before leaving the game.