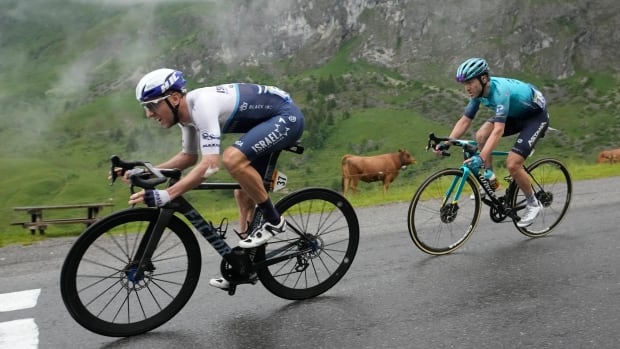 On the first big day in the mountains, Woods joined a breakaway group and made his move on the steep Col de Romme, the penultimate climb of the day.

At the top, Woods had about one minute on the first chase group. But on the slopes of the final climb, Col de la Colombiere, Belgium’s Dylan Teuns came back to the front. Woods tried to hang on but was passed by Teuns and could not regain the lead in the last few hundred metres. Teuns went on to win the stage with Spain’s Ion Izagirre Insausti second.

Still the 34-year-old from Ottawa earned his Israel Start-Up Nation team its first-ever podium place at the Tour.

“On the last climb, I knew that I just had to keep my own tempo not to blow up, so that’s what I did,” said Woods. “Teuns came back so fast and I really suffered, trying to hang on.

“I can’t be disappointed though. I did the best race I possibly could. I covered as many moves as possible early on and I was aggressive. I raced to win and sometimes when you race to win, you’re going to lose, but at least I tried.”

It was a good day for Slovenian Tadej Pogacar, who took over the yellow jersey.

“Ah, what a ride. What a day,” he said, unable to wipe the smile of satisfaction off his face.

Pogacar dealt a demoralizing blow on the first day of the Tour in the Alps when cycling’s precocious star claimed the yellow jersey after what was a gruelling eighth stage to everyone else.

Pogacar started the day three minutes 43 seconds off the lead of Mathieu van der Poel. Five mountain passes and nearly four hours later, Van der Poel finished more than 20 minutes off the pace. The Dutchman relinquished the lead he had held for six days when he faded fast midway through the brutal stage.

Pogacar solidified his bid to retain his Tour title after proving once again to be a step above the rest on the most demanding ascents. He set off on his own on the fourth climb, shedding Carapaz, the last man — and possible contender — to have kept on his wheel.

Teuns, who rides for the Bahrain team, managed to conserve a slim lead over the hard-pushing Pogacar over the final peak before negotiating the tricky descent to the finish line.

Pogacar turns race on its head

While almost the entire field suffered from the climbs in the rain and low temperatures, Pogacar saw the opportunity to turn the race on its head.

“In the end I felt great, so before the last two climbs I said to my teammates, ‘Let’s try and shake up the race,”‘ Pogacar said.

Shake it up? He crushed it.

On Sunday, riders face a second day in the Alps with a 145-kilometre (90-mile) ride over four passes before a summit finish at Tignes. But given the gaps, even the top teams may be focusing on stage wins or the second and third spots on the podium.

The peloton was in poor shape to hold up in the mountains after a crash-filled opening week and Friday’s marathon 249-kilometre haul. The longest stage in the Tour in 21 years had exhausted all but a handful of riders.

And more pain was in store.

In an omen for what was to come, several cyclists were already struggling right from the start. The short ascent under steady rainfall heading into the Alpine forest broke the pack into bits.

While other riders were hunched over the handlebars, Pogacar rode high, raising off his seat to power ahead in pursuit of the breakaway riders.

Again showing that he does not need much help from his Emirates team, Pogacar rode the final 30 kilometres up and over the category-one Col de la Colombiere all on his own.

Pogacar made Tour history by becoming the youngest post-Second World War champion at 21 last year when he stunned Roglic on the race’s penultimate day, overtaking his fellow countryman with a blistering time trial.

His display on the Col de Romme and the Col de la Colombiere is poised to be remembered as the defining moment of this edition barring a dramatic change of fortune.

Anastasia Bucsis sits down with Spirit North’s CEO Beckie Scott, to discuss the organization’s work in Indigenous communities and her hopes for the future. 6:18