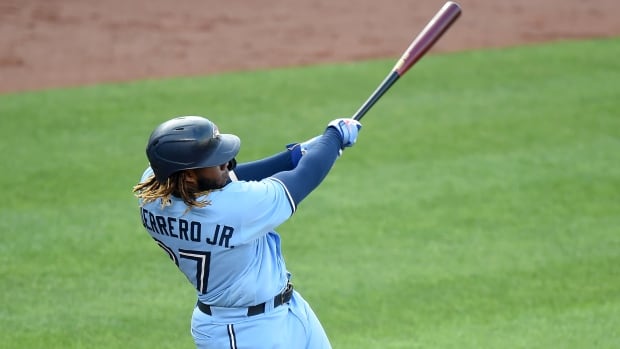 Vladimir Guerrero Jr. hit his major-league leading 23rd homer and later capped Toronto’s ninth-inning rally with a go-ahead, two-run double, and the Blue Jays ended a five-game skid with a 10-7 victory Saturday over the Baltimore Orioles.

Marcus Semien homered twice for Toronto, which scored six runs in the ninth off relievers Paul Fry and Tyler Wells to stun the Orioles.

Ryan Mountcastle recorded his first career three-homer game and Cedric Mullins had his second consecutive multihomer game for Baltimore, which hit six homers in a game for the first time since doing so against Houston on Aug. 18, 2016.

Toronto starter Alek Manoah was ejected for hitting Maikel Franco after surrendering back-to-back blasts in the fourth inning and instigating a benches-clearing incident in which no punches were thrown.

Staked to a 7-4 lead to start the ninth, Fry (0-2) allowed two walks and two hits while recording two outs. Wells entered with the bases loaded and a 7-5 lead, but Bo Bichette blooped a two-run single to right to tie it. Guerrero then laced a double into the left-center gap to give the Blue Jays a 9-7 lead, and he scored on Randal Grichuk’s ensuing double.

Manoah gave up a two-run shot to Mountcastle and a solo homer to DJ Stewart in the fourth to give Baltimore a 5-2 lead. He then plunked Franco on the first pitch, prompting the benches and bullpens to empty. Once the situation cooled down, the umpires conferred and ejected Manoah.

Baltimore starter Dean Kremer yielded solo shots to Semien and Guerrero in the first but no other damage over six innings, striking out six.

Mountcastle, who also had solo blasts in the second and sixth, is the first Oriole with three homers in a game since Pedro Severino did it at Texas on June 4, 2019. He became the second Orioles rookie with a three-homer game — Nick Markakis was the first, doing so Aug. 22, 2006, against Minnesota.

Mullins had solo shots in the third and the seventh a day after going deep twice in the series opener against the Blue Jays.

Barnes, 31, has a 1-1 record with two saves and a 6.27 earned-run average over 19 relief appearances this season with the Mets. The six-foot-two 231-pound right-hander has a 4.53 ERA over his six-year career.

Miller, 24, was 3-2 with a 4.93 ERA over seven appearances with advanced-A Vancouver and double-A New Hampshire this season. He signed a minor-league contract with Toronto in 2018.

The Blue Jays’ bullpen has struggled mightily of late. The team recently dropped below the .500 mark after a decent start to the regular season.

WATCH | What’s next for women’s soccer in Canada?

In partnership with Homestand Sports, CBC takes a look at the state of women’s soccer in Canada, and what needs to happen for the sport to take the next step. 5:02