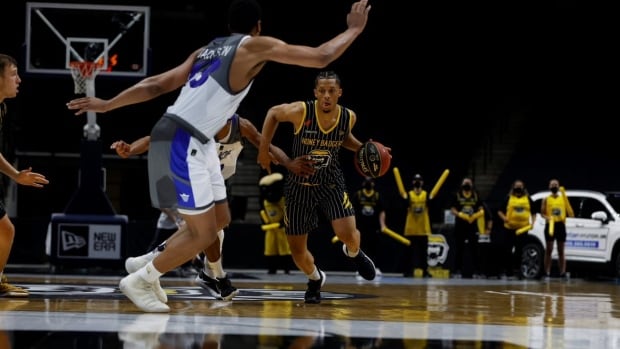 Cody John scored the game-winning three-pointer to cap off a team-high 23-point performance, lifting the Hamilton Honey Badgers to their third consecutive win, a 102-98 victory over the Guelph Nighthawks in Hamilton on Saturday.

Hamilton (3-1) came into the game having won two straight following a season-opening loss to the defending champion Edmonton Stingers and had five players finish with double-figures in scoring. Lindell Wigginton scored 13 of his 21 points in the second half to go along with six assists, while J.V. Mukama scored 18, Trevon Duval added 16, and Alex Johnson posted 10 points off the bench.

Guelph (0-2) entered the game seeking its first victory of the season after an ugly season-opening loss to the Ottawa BlackJacks on Monday. The Nighthawks were led by Cat Barber who scored 30 points, while Justin Jackson and Isaiah Reese added 23 and 22 points respectively.

The game proved to be a tight, offensive showcase, as both teams held their own shooting at a high clip for much of the game.

The second half was much of the same, as neither team managed to get too far away from the other and continued scoring at will from all three levels.

After going up five at the end of three, Hamilton only managed to hold a one-point lead going into the Elam Ending, the score being 92-91.

The Honey Badgers found themselves with a 99-96 lead a few minutes into the Elam Ending after a pair of free throws from Keenan Veinot but Reese cut the deficit down to one with a layup on the very next possession.

The two teams will play each other again on Monday.

The Stingers sharpshooter led the way with 38 points to push Edmonton past Niagara in CEBL action. 1:01