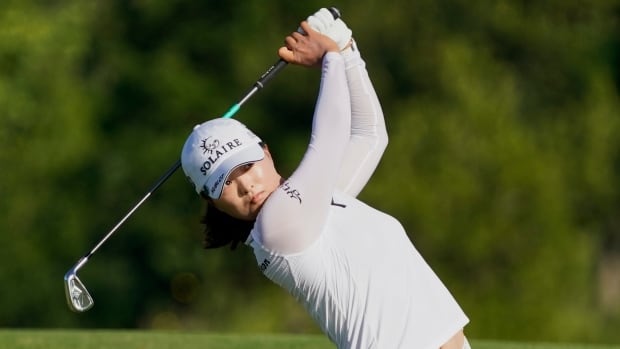 Her nearly two-year run at No. 1 in the women’s world golf ranking over, Jin Young Ko was back on top Thursday in the Volunteers of America Classic.

Ko shot an 8-under 63 in hot conditions at Old American to take a one-stroke lead over fellow South Korean major champions and area residents In Gee Chun and Jeongeun Lee6.

The 25-year-old Ko lost the No. 1 ranking when Nelly Korda won the KPMG Women’s PGA Championship on Sunday for her second straight victory.

Ko started her morning round with seven pars, made a 15-foot eagle putt on the par-5 17th and played the final nine in 6-under 29 as the temperature climbed into the mid-90s.

“Shot wasn’t good, but putting was really good,” said Ko, who has a home in nearby Frisco. “And then I read the break really well today, so I had confidence on the green. I made a lot of putts today.”

Jin Young Ko went 8-under on her last 11 holes of the first round to take a one stroke lead at the Volunteers of America Classic. 0:08

Chun and Lee6 each had seven birdies in a bogey-free 64 in the afternoon.

“Feel comfortable staying in the house,” Chun said. “It’s the first time to be like home during the tournament week and playing like tournament. So it feel a little different, but it’s really good. I’m so happy to play with my fans and my friends and my neighbors here.”

“These days my feel is not best, but I’m trying my best every day,” Lee6 said. “I played well today.”

“I’m an Alabama grad, live in Nashville, and am from Kentucky,” Talley said. “So this heat, it’s terrible, but I am used to it.”

Defending champion Angela Stanford, the local favorite playing alongside Ko the first two rounds, shot 69. The tournament was played in early December last year when the schedule was reconfigured because of the pandemic.

Lizette Salas, coming off a second-place finish in the Women’s PGA, birdied the final two holes for a 70.

“I’m a little fatigued and maybe a little mentally drained, but I still know I can play some good golf,” Salas said.

Hamilton’s Alena Sharp opened with a 1-over 72 and Calgary’s Jaclyn Lee fired a 6-over 77.

Maria Fassi opened with a 73. The Mexican player missed the cut by a stroke in the Women’s PGA after getting a two-shot penalty for slow play.