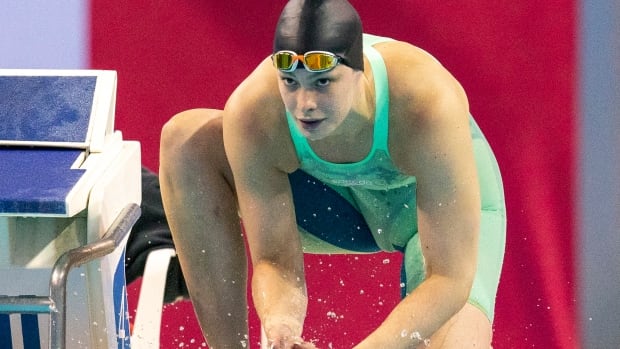 This is an excerpt from The Buzzer, which is CBC Sports’ daily email newsletter. Stay up to speed on what’s happening in sports by subscribing here.

Penny Oleksiak is back

Swimming is hard. The amount of talent, dedication, perseverance and sheer pain tolerance needed to win an Olympic gold medal in this sport is beyond the grasp of most of us normal humans. To stay at that level for another four years (or, this time, five) to defend your title at the next Olympics? With younger, hungrier athletes trying to hunt you down every day? It’s almost too much to ask.

Take the two women who tied for gold in the 100-metre freestyle at the 2016 Rio Olympics. American Simone Manuel, who’s still only 24 years old and added the world title in 2019, couldn’t even make it past the semifinals last week at the U.S. trials. Canada’s Penny Oleksiak seemed more regression-proof because of her age — she was only 16 when she won in Rio. But since then, she admits, she’s struggled with the pressure and expectations that came with her instant celebrity. Staying motivated was also hard at times for someone who enjoys spending time with friends and having a social life outside the pool.

That’s a healthy approach. But a sensible work/life balance can be a barrier to success in the brutal world of competitive swimming. It’s not enough to simply maintain your times from the last big meet. If you’re not getting faster, you’re getting slower.

And so it seemed like Penny’s days as an Olympic individual medal contender might be done. She remained a valuable relay swimmer, helping Canadian teams win five bronze medals at the 2017 and ’19 world championships. But, with the exception of a bronze in the 100m freestyle at the short-course worlds in late 2016, Oleksiak hasn’t reached the podium in a solo event at a major international meet since Rio. When Swimming Canada awarded an entry in the women’s 100m freestyle at the Tokyo Olympics to one of its athletes back in the winter, it went not to the reigning Olympic champ but to Taylor Ruck, who’d surpassed Oleksiak as Canada’s top swimmer in the event. Penny got a spot in the 200 freestyle. But, in order to even have a shot at defending her 100 title in Tokyo, she needed to finish in the top two in last night’s final at the Canadian Olympic trials — and meet the Olympic standard time. In other words, she had to earn it.

And did she ever. Oleksiak pulled away from a talented field to win the race in 52.89 seconds — her best time since the still-standing Canadian and Olympic record of 52.70 she swam in Rio. It also makes Oleksiak the fourth-fastest swimmer in the world this year in the women’s 100 free. Suddenly, Penny looks like an Olympic contender again.

This is where we might want to check our expectations for Tokyo. Australia’s two women’s 100m freestyle qualifiers — Emma McKeon and Cate Campbell — both went under Oleksiak’s/Manuel’s Olympic record time at their national trials. And 52.04 (by Manuel) was the winning time at the 2019 world championships, where the Olympic record wouldn’t have even gotten you onto the podium.

On the other hand, Penny clearly has her mojo back. “I’m excited to swim again,” she said after last night’s 100m win in Toronto. And it’s going to be exciting to watch her defend her gold medal in Tokyo, where the Olympic swimming events begin exactly one month from tomorrow.

The Canadian trials wrap up tonight with six races. Fourteen-year-old sensation Summer McIntosh, who beat Oleksiak to win the 200m freestyle on Sunday and won the 800 on Monday, was supposed to swim in the 1,500 tonight. Instead, it was decided that she should rest. But she’s expected to be awarded an Olympic spot anyway, giving her three individual events in Tokyo.

Reigning 100m backstroke world champion Kylie Masse is expected to swim in tonight’s 200m final, even though she’s already been granted an Olympic spot in that event too after taking bronze at the 2019 worlds. Three-time world championship medallist Sydney Pickrem is expected to compete in the 400 individual medley. She was given an Olympic berth in this event, plus the 200 IM and the 200 breaststroke. Watch all of tonight’s races live starting at 5:30 p.m. ET here.

Canada revealed its Olympic women’s soccer roster — and there were a few surprises. Rookie coach Bev Priestman selected a dozen players from the team that won Canada’s second consecutive bronze medal in Rio. That group is led by captain and all-time international goals leader Christine Sinclair and also includes four-time UEFA Women’s Champions League title winner Kadeisha Buchanan. Veteran midfielder Diana Matheson is out of the Olympics due to a foot injury. The five Olympic rookies on the team include Vanessa Gilles and Evelyne Viens, who have only 13 international matches combined but impressed Priestman in recent outings. Somewhat surprisingly, veteran midfielder Sophie Schmidt (205 caps), goalkeeper Erin McLeod (118) and promising 20-year-old forward Jordyn Huitema were named as alternates, not as part of the main roster. Canada is ranked eighth in the world. Its first Olympic match is on July 21 (two days before the opening ceremony) against 11th-ranked Japan. Canada’s other group-stage opponents are Chile (37th) and Great Britain (unranked because the team only exists for the Olympics, but England’s No. 6 ranking is a decent proxy). The top two in each of the three groups advance, plus the two best third-place teams. Read an in-depth analysis of Canada’s roster by CBC Sports soccer contributor John Molinaro here.

Canadian sports gamblers are about to have more options. After several failed attempts to pass similar legislation, the Senate yesterday approved Bill C-218, which amends the Criminal Code to allow for single-game wagering. Provincial/territorial lotteries have offered sports betting for years — but only in the form of parlays, where you have to correctly predict multiple outcomes in order to cash your ticket. Anyone who wants to wager on a single game has had to turn to the black market of local bookies or enter the legal gray zone of online betting sites, which are mostly based offshore. Once the new bill gets royal ascent, provinces and territories can add single-game wagering to their current lottery products and/or offer it at the brick-and-mortar casinos they control. It’s also possible that private sports-betting companies will be allowed to set up shop in Canada — primarily online, most likely, but maybe even in some physical locations. That’s what’s happened in the U.S. since its Supreme Court opened the door for states beyond Nevada to allow single-event sports betting. Read more about the passing of Canada’s sports-betting bill here.

The Montreal Canadiens are one win away from the Stanley Cup final. Montreal ran away with a 4-1 win last night in Las Vegas to take a 3-2 lead in their semifinal series with the Golden Knights. Game 6 is Thursday night in Montreal, and Game 7 (if necessary) is Saturday night in Vegas. The start time for both is 8 p.m. ET on CBC TV, CBCSports.ca and the CBC Sports app. If the Habs win either game, they’ll become the first Canadian-based team to play in the Stanley Cup final since Vancouver lost to Boston in seven games in 2011. They’d also be four victories away from becoming the first Canadian team to win the Cup since the Habs in 1993. Game 6 of the other semifinal is tonight. Defending champ Tampa Bay can finish off the Islanders after routing them 8-0 on Monday. Watch the game live at 8 p.m. ET on CBC TV, CBCSports.ca and the CBC Sports app.

The Toronto Raptors got the fourth pick in the NBA draft. Based on where they finished in the overall standings, the Raptors ought to be picking seventh. But they got lucky and moved up three spots in last night’s lottery. Detroit, which finished second-last this season, won the No. 1 pick. It’s considered a fairly deep draft with no clear top choice. One-and-done college players Cade Cunningham (an Oklahoma State guard), Evan Mosley (USC centre) and Jalen Suggs (Gonzaga guard) could all go first overall. So could guard Jalen Green, who took an unconventional path by opting to spend last season in the NBA G-League rather than play college ball. Read more about the draft lottery results and the top prospects here.

You’re up to speed. Talk to you tomorrow.