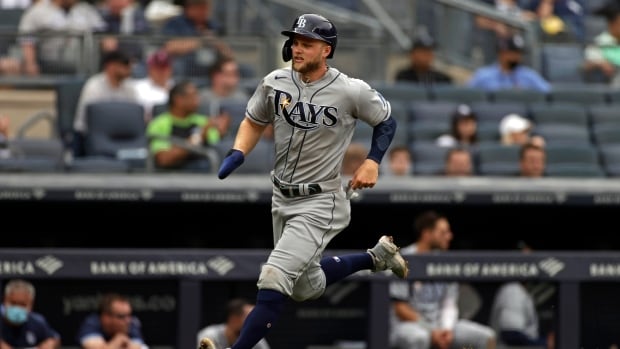 Austin Meadows had three hits, including two RBI doubles, and the Tampa Bay Rays ended their 10-game road losing streak with a 5-1 victory over the Toronto Blue Jays on Sunday.

Wander Franco hit his second homer for Tampa Bay, which had dropped five in a row overall. Yandy Diaz had two hits and scored twice.

The Rays trailed 1-0 before Franco connected in the sixth inning against Robbie Ray (6-4). Diaz then doubled and scored on Meadows’ first double.

Randal Grichuk hit his 15th homer for Toronto in the second. Bo Bichette had two of Toronto’s six hits as the Blue Jays fell four games behind the second-place Rays in the AL East standings.

Ray allowed five hits in seven innings and finished with six strikeouts. He now has 119 in his 16 starts this season, the second-most by a Blue Jays pitcher over their first 16 starts, trailing only Roger Clemens’ 122 in 1997.

Toronto was looking to sweep Tampa Bay for the first time in a three-game series since September 2015.

Tampa Bay recorded eight hits after mustering a total of 10 and batting only .156 in the first two games of the weekend set against Toronto.