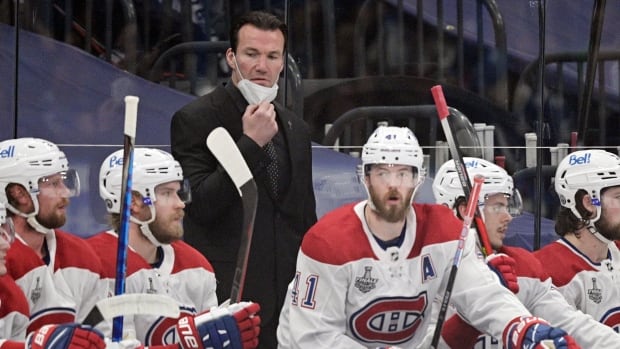 Luke Richardson saw a lot of positives, yet his run as acting coach of the Montreal Canadiens likely ended with the Habs down 2-0 in the Stanley Cup Final after a tough 3-1 loss to the defending champion Tampa Bay Lightning.

We’re getting better,” said Richardson after Montreal outshot Tampa Bay 43-23 on Wednesday night. “And we just plan on getting better the next game and winning that Game 3.”

Head coach Dominique Ducharme is expected to be back behind the bench for Game 3 on Friday night when the series shifts to Montreal.

Ducharme was required by provincial protocol in Quebec to isolate for 14 days after testing positive for the coronavirus. That two-week period ends Friday.

Ondrej Palat capitalized on a late turnover from Joel Edmundson to put an end to any potential comeback from the Montreal Canadiens in game two. 1:03

Richardson took over the coaching reins for the third game of the semifinal series against Vegas in which Montreal eventually won in six games. It put the tradition-rich Canadiens back in the final for the first time since 1993.

After a 5-1 loss in Monday’s series opener, Montreal controlled play for most of the first two periods Wednesday but trailed 2-1 after 40 minutes when Tampa Bay’s Blake Coleman beat Carey Price with a diving goal in the final second.

“I thought the guys had a lot of character,” Richardson said. “They came out and played hard in the third. And unfortunately it didn’t go our way. But I was confident our guys would bounce back and play our style of game, and play it hard. And we did.”

Montreal prevented the Lightning’s dominating power play from scoring on three chances, with the Canadiens converting one of their three opportunities.

“So it’s a little frustrating knowing we played a good game,” Richardson said. “But we did that last series. We played probably one of our best games in the last series against Vegas and we didn’t come out with the win (in Game 4). And the next game we persevered. And that’s what we plan to do again here.