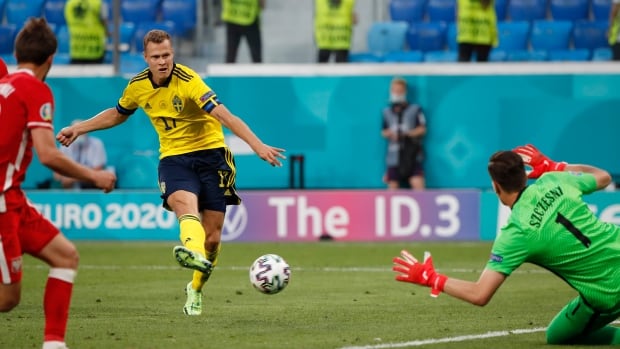 Even with two goals, Robert Lewandowski still couldn’t stop Poland from making an early exit at the European Championship.

The FIFA player of the year made amends for an astounding early triple miss by scoring twice in the second half on Wednesday, but Viktor Claesson got the winning goal in stoppage time to give Sweden a 3-2 victory.

Emil Forsberg scored twice for the Swedes, which finish in first place in Group E and will next face a third-place finisher in Glasgow on Tuesday.

For Poland and Lewandowski, it’s another early exit from a major soccer tournament.

The Bayern Munich striker leaves Euro 2020 with three goals, his best haul at a World Cup or European Championship. But even his double against Sweden — in the 61st and 84th minutes — might be overshadowed by an extraordinary sequence of events in the first half when he headed the ball against the crossbar twice in as many seconds.

After the second one, the ball landed at the striker’s feet in front of goal but it got caught in between his legs and he still couldn’t score.

There were gasps, and even some laughs, inside the Saint Petersburg Stadium as replays were shown on the big screens.

Forsberg had already scored by then, after 81 seconds for the second quickest goal in the tournament’s history. He added a second in the 59th on a counterattack.

Poland needed a win to advance, but they couldn’t even hold on for the draw after Claesson broke free for the final goal in the last seconds.

That lifted Sweden back above Spain, which was easing to a 5-0 win over Slovakia in a match being played simultaneously. Spain would have finished first in the group if not for Claesson’s goal.

It is more disappointment at international level for Lewandowski, who was coming off a record-breaking year at Bayern after scoring 41 goals in a single Bundesliga season. He has moved into third place, behind only Cristiano Ronaldo and Lionel Messi, for goals scored in the Champions League, and now has 69 goals for his country.

But it seems he will just have to settle for being a title-winner at club level. In four appearances at a major tournament with Poland, Lewandowski has departed from the group stage three times.

He is now 32, with perhaps only two major international tournaments left in him — if Poland qualifies.

Like Lewandowski, Forsberg now has three goals at Euro 2020 and has the honor of scoring the quickest goal in this year’s tournament.

Only Russia player Dmitry Kirichenko — in 2004 against Greece — has scored a faster goal than Forsberg, who collected a bouncing ball from Alexander Isak’s blocked shot and converted a low, left-footed finish.

The winger put Sweden ahead 2-0 by curling in a low shot at the end of a counterattack led by substitute Dejan Kulusevski.

Seeking to make amends, Lewandowski almost single-handedly brought Poland back to the game.

He ran onto a pass, cut inside, and curled an exquisite finish into the top corner for his first goal. He then collected a cross from the left that was missed by the Sweden defense and showed calm to sidefoot into the corner.

One more would have completed a remarkable story of redemption for the striker after his early misses.

But it was Claesson, not Lewandowski, with the final say.

Spain defeats Slovakia in dominant fashion, advances to knockout round

A bizarre blunder by the goalkeeper helped Spain find its scoring touch at the European Championship.

And it also helped them advance to the round of 16.

An embarrassing own-goal by goalkeeper Martin Dubravka in the first half put Spain on its way to a 5-0 victory Wednesday, coming only minutes after the hosts had missed another penalty kick and wasted more scoring chances.

Dubravka saved that early penalty from Alvaro Morata but then clumsily knocked the ball into his own net after it ricocheted high into the air off a shot by Pablo Sarabia in the 30th minute.

Dubravka stood just off his line and waited for the ball to descend. He jumped to swat it over for a corner, but the ball veered to his left and rolled off his right hand and into the net.

Desolate, he stood by the goal line as some of his teammates came over to support him.

Aymeric Laporte added to Spain’s lead before halftime, and Sarabia, Ferran Torres and another own-goal in the second half made it five for “La Roja,” which had been facing elimination in front of its own fans.

The victory allowed Spain to advance in second place in Group E with five points. The team will next play Croatia in Copenhagen on Monday. Sweden, which defeated Poland 3-2 in the other match, won the group.

The result eliminated Slovakia, which needed at least a draw to guarantee its place in the next round.

Slovakia, which reached the last 16 at Euro 2016 in France, won its first match this year with the help of an own-goal by Poland goalkeeper Wojciech Szczesny.

The match marked the return of Spain captain Sergio Busquets after he had to be in isolation following a positive test result of the coronavirus ahead of the tournament.

“It was the type of match we needed. It gives us a big boost going forward,” an emotional Busquets said. “This will make us stronger. We are on the right path.”

Busquets, voted the man of the match, gave Spain the balance it needed in midfield after it opened with two disappointing draws. The only player left from the World Cup-winning squad in 2010, Busquets helped the team create chances in attack and keep the defense more protected.

After the own-goal by Dubravka, Laporte added to Spain’s lead with a header in first-half injury time after a nice buildup that started with a neat lob pass from youngster Pedri Gonzalez to Moreno.

Sarabia got his goal from inside the area after a cross by Jordi Alba in the 56th, and Torres increased the lead with a nice back-heel flick from close range in the 67th.

Slovakia finished with no attempts on target.

Luis Enrique made four changes from the team that was held to a 1-1 draw by Poland, bringing in veterans Busquets, Cesar Azpilicueta and Sarabia, in addition to Eric Garcia on defense.

Spain missed its second penalty at Euro 2020 when Dubravka dived to his right to stop Morata’s mid-height shot in the 12th minute. The penalty came after Koke Resurreccion was kicked by midfielder Jakub Hromada inside the area. The referee initially signaled a foul against Koke but the call was reversed by video review.

Gerard Moreno had missed a penalty against Poland.