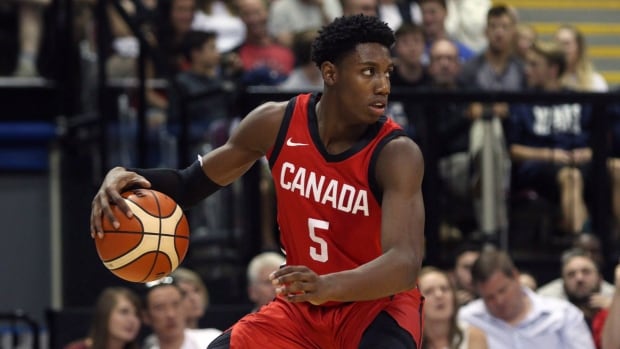 There’s an unmistakable positive energy surrounding the Canadian men’s basketball team as they compete at the Olympic qualifying tournament in Victoria, B.C. this week.

The cast of 12 wearing the red and white are growing game by game, carving out a winning identity. They’re highly talented, driven and seem to be having fun in the process.

The team is just two wins away from doing what no other men’s squad from Canada has done in more than two decades—qualify for the Olympics.

But for all the excitement surrounding this high-powered team following their 30-point victory over China on Wednesday to clinch top spot in Group A, there isn’t a single player on the roster, coaching staff or Canada Basketball who are looking too far ahead.

Rowan Barrett is the general manager of the men’s national basketball program. He was also part of the last Canadian team to play at an Olympics.

His son R.J., who was just months old when Barrett was wearing the maple leaf at those Sydney Games in 2000, is now part of this current team trying to get back to the Olympics.

“As a father, to watch your son play for this country and follow in my footsteps as a parent is special,” Barrett said. “To see him in the thick of it now and see him fight for his Olympic dream is a really, really amazing thing.”

While Barrett doesn’t mind reflecting on his journey and the one his son is on now, he’s not interested in spending too much time reminiscing about it.

“We have to figure out how to pull this all together. We can’t get too nostalgic. We’re in the middle of a tournament and our focus is on how we get better tomorrow,” said Barrett.

His son is one of eight current NBA-ers on the Canadian roster in Victoria. Getting this much talent to commit to the national program has been something that’s plagued Canada in the past.

But that doesn’t seem to be the case anymore.

Canada had seven players record double-digit points in their 109-79 win over China at the FIBA Olympic qualifying tournament in Victoria, B.C. 2:37

Rowan wanted to make sure that every move the national program made was in line with what head coach Nick Nurse calls the “golden age” of Canadian basketball—athlete-focused and intentional about supporting each player and their needs.

“It always begins and ends with the players. Let’s be clear. This is an athlete-centred program that I lead. They are the most important resource that’s here. Everything we do starts with them,” he said.

Creating a program that entices players to want to wear the Canadian jersey is at the heart of what drives Barrett’s decisions. That included making sure they locked up Nurse as head coach.

“Nick is a champion. He was a champion before he won with the Toronto Raptors. He knows how to win,” Barrett said.

“It was important to find someone who understood how to do that.”

Barrett and Canada Basketball CEO Glen Grunwald won’t get into the details of how they locked up Nurse as head coach of the men’s national team, but they knew how crucial getting him at the helm was.

“We actually hired Nick before the 2019 playoffs began that year, but we agreed with the Raptors not to distract from what they were doing,” Grunwald said.

“We kept it quiet the best we could.”

Two weeks after the Raptors championship they made the official announcement.

“Sometimes you have to pull teams together quickly. When you’re trying to qualify a team for the Olympics, you’re not getting the athletes for two months to get ready to play,” Barrett said.

“He has those experiences of pulling teams together quickly and getting them to jell and having processes in place to make that happen.”

The first priority is obviously qualifying for the Tokyo Olympics but Grunwald doesn’t want it to stop there.

“We’re building a program and trying to make sure this isn’t a one and done situation,” Grunwald said.

“We’re working to make sure Canada basketball will be a powerhouse, medal contender for years to come.”

The way Barrett believes that can happen is by creating an atmosphere that understands the importance of playing as a team.

“You don’t succeed without that. I think we have players who are unselfish. They’re driven. They want to succeed.”

And it seems as though all of the players have bought into that mantra and this journey.

During almost every interview this week, the Canadian players have talked about doing whatever it takes to win, understanding their roles on the team.

They also appreciate the sense of urgency to cash-in on the opportunity that’s before them.

“We’re still learning to play together but every game we’re getting better. The chemistry is building and hopefully we can keep going,” Wiggins said after the win against China.

In the win against China, 11 of the 12 players scored for Canada.

If they keep doing this, Barrett believes this Canadian team will find its way to Tokyo.

“At this moment it’s about how we fight and scratch and claw to give another generation of athletes now the opportunity to experience the Olympics,” he said.

“They’re Canadians who have a dream and want to play in the Olympic Games.”

Canada plays Saturday afternoon in the semifinal against either Czech Republic or Uruguay. Should they win, they’ll play in the championship game Sunday evening with a spot in the Olympics on the line.